We have made it our mission to preserve the objects in our care and make them available for people to learn from and enjoy. What you may not know, is that there are significant costs to maintaining and conserving the museum’s collections and to make them accessible to all. So, why not help us by sponsoring an object from our collections? The money you donate will be used to help make sure that these historic artefacts are preserved and available for future generations. 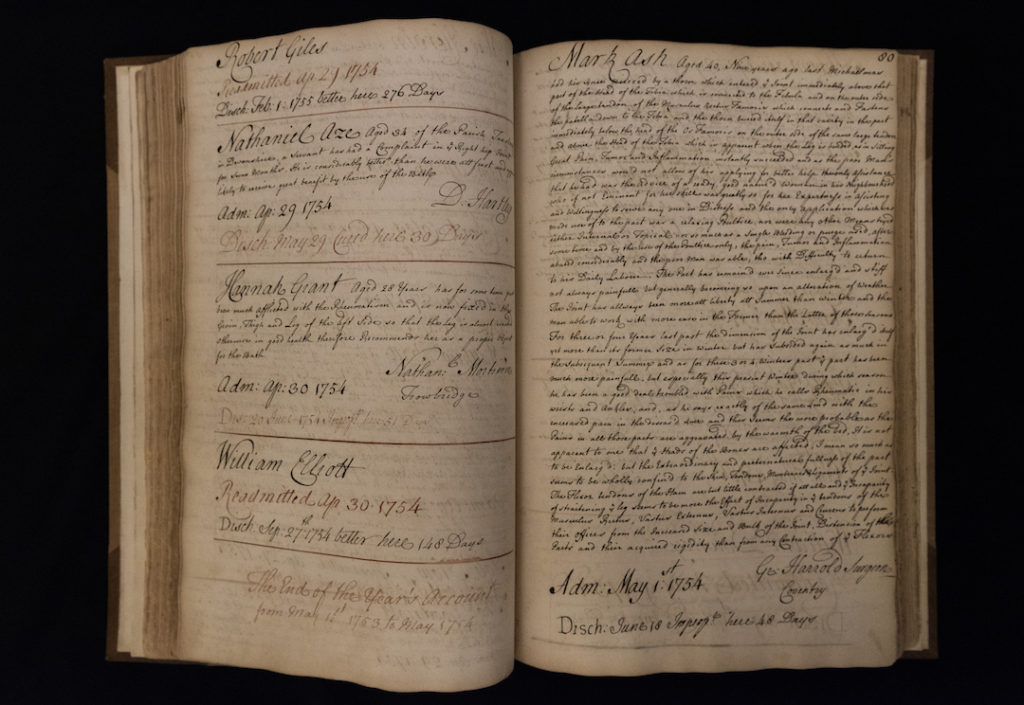 Select your favourite item from the list below and help sponsor it through a donation in its honour. Follow the link to the Sponsor an Object appeal on our Local Giving page to make your one-time or monthly donation, remembering to tell us which object by leaving a comment. Your generosity will ensure the objects in our care are there for all to enjoy! 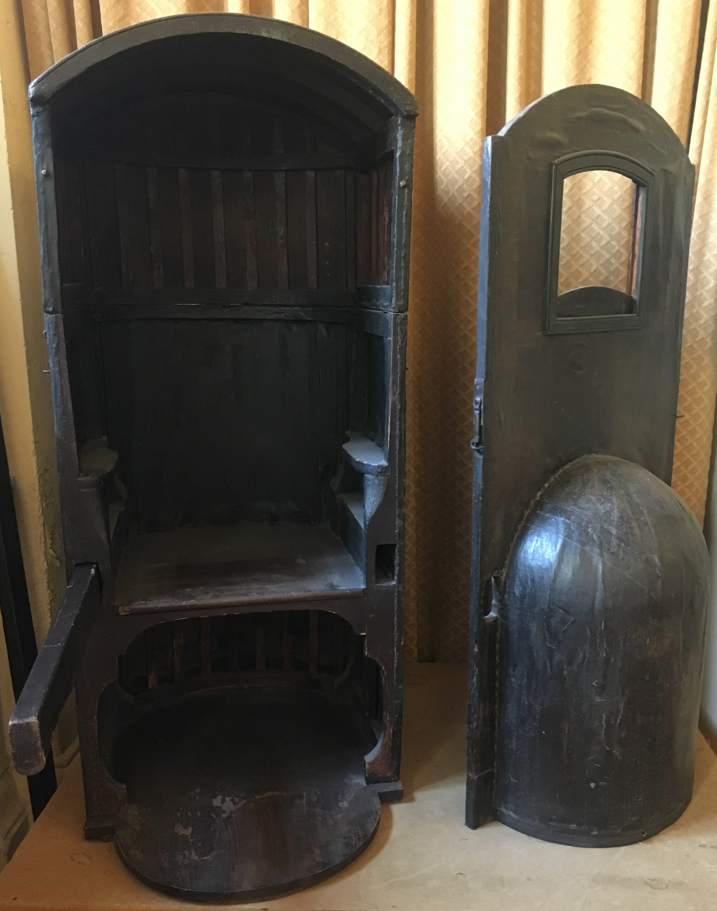 Prior to Spa water being piped directly to the Mineral Water Hospital in 1830, patients had to go to the Baths for treatment. This chair is one of three special sedan chairs that were constructed to aid those unable to walk to the baths. Designed by one of the surgeons who worked at the hospital and constructed by a carpenter named Mr Jelly, the chair differs from the usual models of sedan chair in that it includes a large space within the front panel to accommodate enlarged and tender arthritic knees.

The chair was carried by two porters and was also accompanied by two ‘bath guides,’ whose duty it was to check the water temperature and ease the patient’s limbs into the water. Being a chairman was a very physically demanding job, with some chairs weighing around 60lb before a person being sat inside. John Mackay wrote of the process of being taken down to the Baths in 1720; “The chairmen, whatever storey you sleep on, come to one’s bedside, strip you, give you their dress, wrap you in blankets, carry you off… and then after bathing you are carried home.” This is the only remaining chair and as such is a very rare relic of Bath’s Medical Heritage. 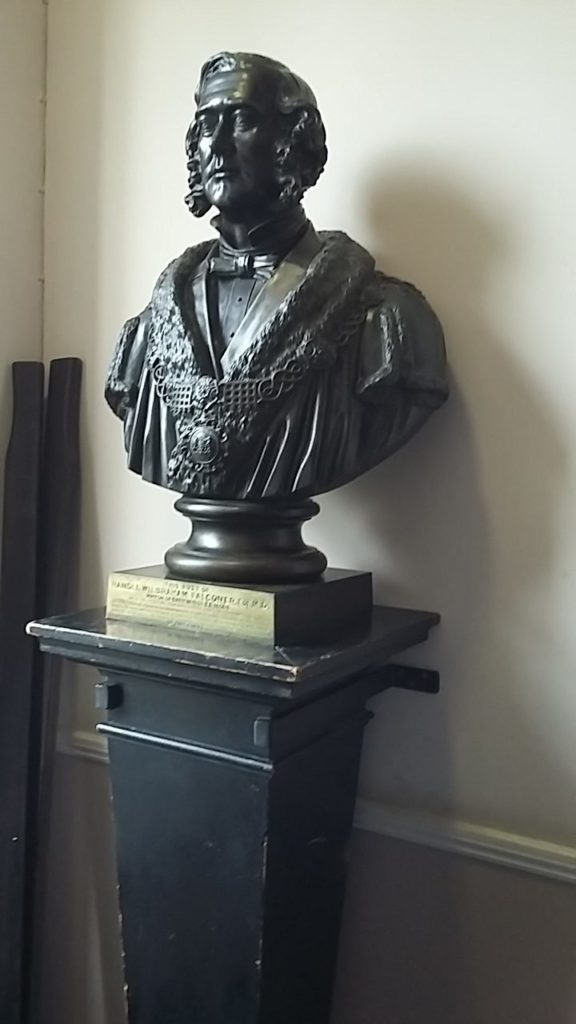 Dressed in his Mayoral Chain, this Bronze bust depicts Dr Randle Wilbraham Falconer M.D, the Mayor of Bath in 1857 and between 1858 to 1859 and a leading physician within the city. Falconer himself hailed from a family with a rich involvement in Bath’s medical history, with both his father and grandfather being noted physicians.

Having graduated as a Doctor of Medicine from Edinburgh University in 1839, Falconer initially set up practise in Tenby, Wales for several years before relocating to Bath in 1847. Falconer operated as a physician to the Mineral Water Hospital, colloquially known as ‘The Min,’ between 1856 to 1881 during which time he also became a fellow of the Royal College of Physicians in 1866 and was President of the Bath and Bristol section of the British Medical Association between 1864-5. Falconer was fascinated by the curative values of the Spa and produced several works on the subject, in addition to also writing the first history of the hospital.

Upon his death in 1881, his contemporary Jerom Murch remarked that Falconer was to be ‘celebrated as a man who, having made the world a better place, would not be quickly forgotten in Bath.’

A precursor to the modern safe, despite their name “Armada chests” have little to do with the Spanish Armada. Initially known as Nuremberg Chests, for the region in Germany where many of them were produced, the term ‘Armada’ was introduced in the Victorian era as it was imagined that this was the sort of chest that would have been used to house Spanish gold. Most examples of these chests include intricate and complicated locking mechanisms, including imitation keyholes, false panels, or require a certain sequence to open them. This particular chest requires two keys to open and was used by the Bath General Hospital as a lockbox. 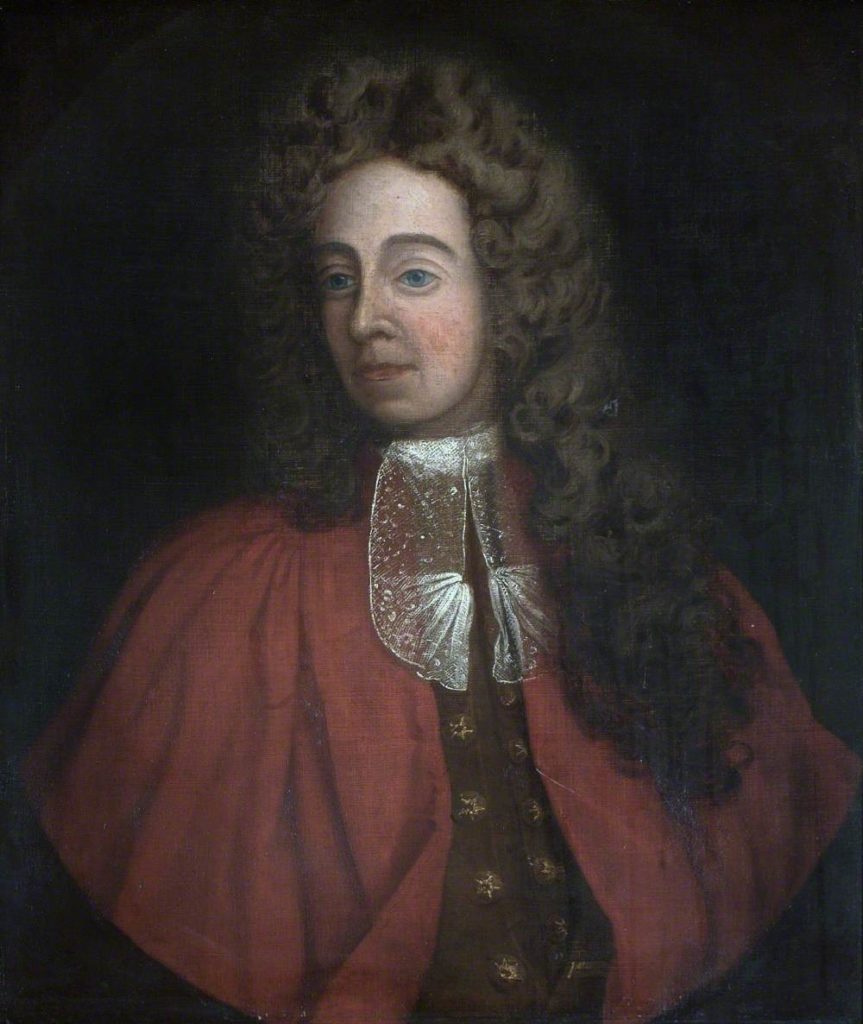 This painting depicts the highly regarded Oxford physician Dr Richard Frewin M.D. Though his activities were primarily based in Oxford, due to the amount of his patients who either came to Bath for the season or upon his recommendation to take to the waters, Frewin remains an important part of Bath’s medical history. Frewin purchased a house in Queen Square in 1745, and his name appears each year in the list of visitors arriving in April. In 1750, Frewin was nominated as President of the Bath General Hospital, a position he declined in a letter noting that he felt he was unworthy of the position and that his replacement Lord Viscount Palmerston was a much better choice. Despite rejecting the presidency, Frewin remained involved with the hospital and towards the end of his life Frewin also operated as a governor, until his death in 1761.

Portrait of Mrs Morris, Mother of the First Apothecary 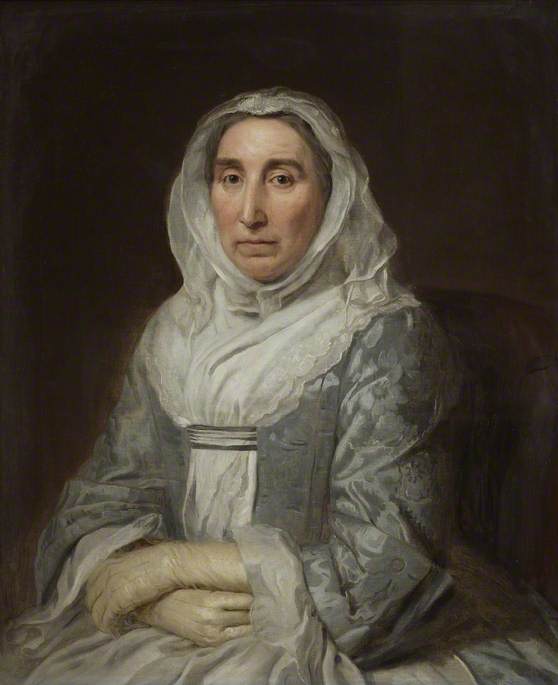 One family very much involved in the early years of the Bath General Hospital was the Morris family. Depicted in this painting is Mrs Morris, the mother of the first apothecary of the hospital, John Morris, who himself operated between the years of 1733 to 1757. The portrait was painted by John’s son, Benjamin Morris, in addition to a portrait of John that is also part of the Bath Medical Museum Collection. John’s other son, Daniel Morris partnered and succeeded his father in the apothecary, operating between 1742 and 1776.

The Morris family clearly felt a connection to the hospital. Upon his death in 1807 Benjamin made various charitable bequests including £50 to the hospital and a collection of his paintings. Similarly, Daniel left his own pastel of Beau Nash to the hospital when he died in 1784.

Portrait of an Unknown Gentleman 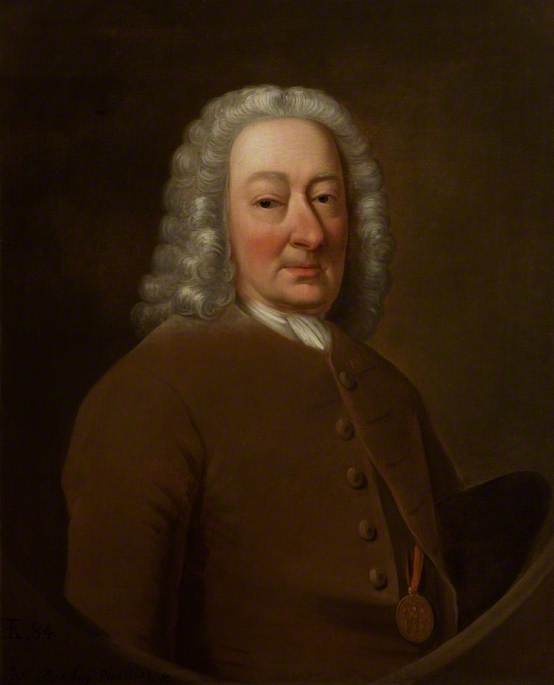 The subject of this portrait, a gentleman in a powdered wig, is currently unknown however it is likely that he was one of the governors of the hospital when the painting was produced in the 1750’s. The painting itself is currently attributed to Jan Frans Beschey, appearing to bear the J.F Beschey signature on the reverse. Jan Frans, also referred to as Jean Francois, was of the the younger brothers of the noticeable Flemish painter and draughtsman Balthasar Beschey. While Balthasar spent his whole life on the continent, Jan Frans established himself primarily as an art dealer based in London. It is likely through this connection that Jan Frans Beschey made connection with the subject of this painting.

As a point of interest, Jan Frans is usually associated with populated landscapes and scenes of a Christian religious nature as opposed to portraits like this one. It is therefore possible that this is in fact the work of another Beschey brother, Jozeph Hendrick who worked under the pseudonym Francis Lindo. 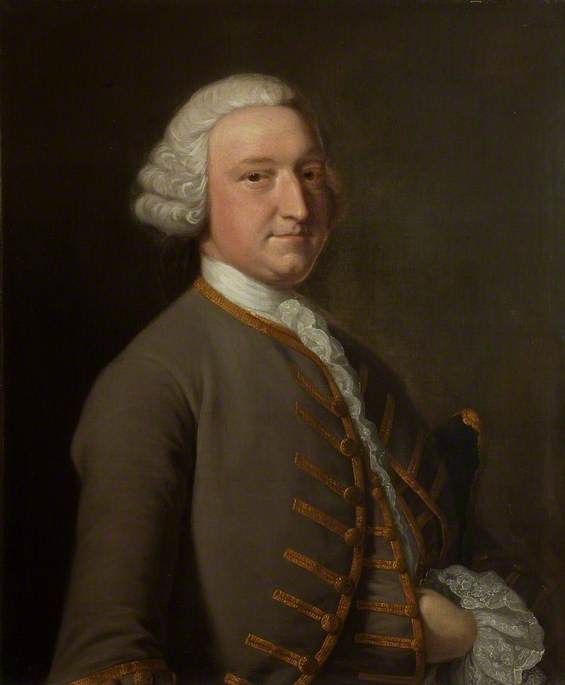 Depicted here is Major William Brereton, who operated as Master of Ceremonies at the Lower Assembly Rooms in Bath between the years 1777 and 1780. Hailing from the Cheshire family of Brereton of Brereton Hall through its Irish branch, William was born in Ireland in 1723. As a young man he served as Cornet in the 6th Inniskilling, Dragoon Guards and fought at the Battle of Culloden in 1745. He died at the age of 89 in 1813 in Holt, Wiltshire. Confusingly, William fathered two sons who also carry the name of William Brereton; one by his first wife, Marion Edmundston, who became an actor on Drury lane, and one by his second wife Harriot Hooley, who had a successful career in the military.

This painting was donated by a Captain H. Montagu in 1864. Given that Brereton’s son, Lt General Sir William Brereton died that same year, it is possible that the painting was initially in his possession before being passed on to the hospital upon his death. 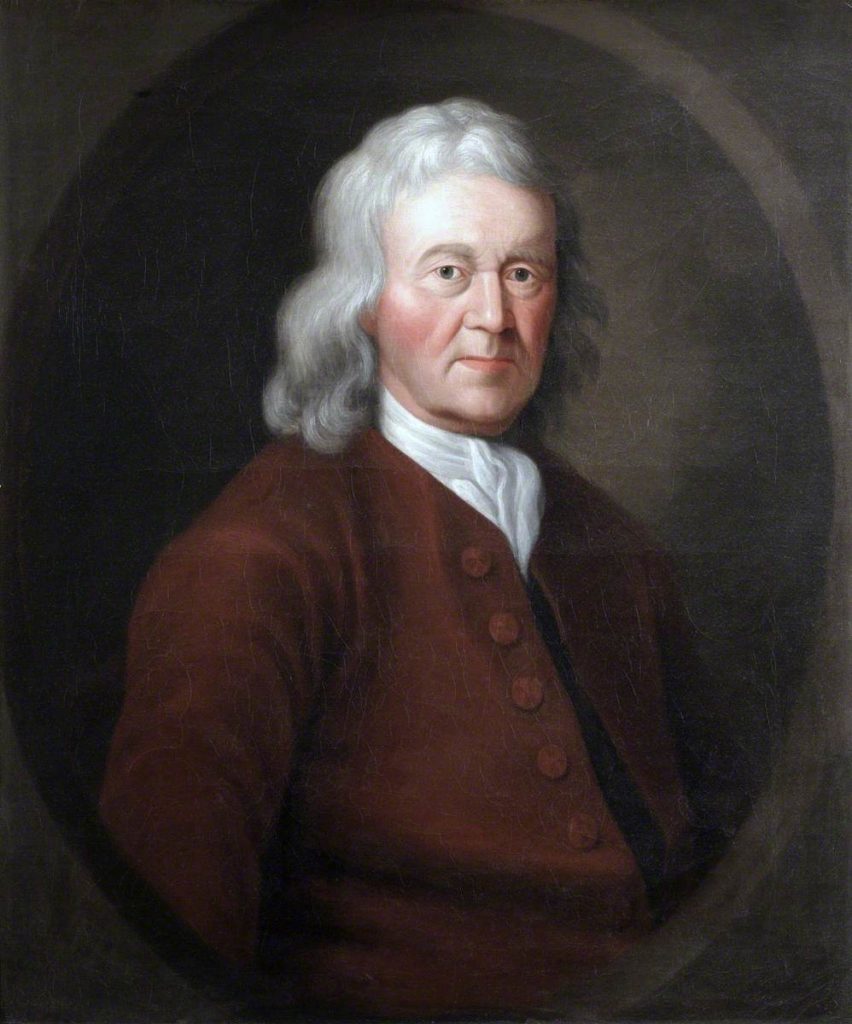 Painted by noted portrait painter Thomas Hudson, this portrait depicts the Bath surgeon John Donne. Donne was one of the first five surgeons appointed to Bath General Hospital when it initially opened in 1738 and became a governor of the hospital in 1748. He is listed as having attended the weekly committees up until his death on the 23rd of May 1782, though he was not as regular an attendee as some of his colleagues. His wife, Mary survived him living at 11 Bladud Buildings until her death in 1792. They had no children, and left their belongings to siblings, nephews and nieces alongside £100 to the Bath Hospital and the Bristol Royal Infirmary.