Before the last century, many people believed there was some special property in the hot springs of Bath which could cure diseases or at least help to restore health. Various constituents of the water’s mineral content were suggested as the curative principle but all were eventually dismissed. Some thought the geothermal heat differed from ordinary heated water and might explain the healing effect. But there was no real evidence to support this claim and by the end of the nineteenth century people were on the point of giving up the search for a curative principle.

This all changed in 1903 when Prof. R.J. Strutt detected minute quantities of radium in the hot springs. This led to the discovery that radon, a radioactive gas produced by the nuclear degradation of radium, was also present. Radioactive elements “degrade” to new elements by the breakdown of their unstable nuclei. In the process, the nuclei release various forms of radiation, some of which can be harmful although this was not realised in the early days of radiation research. Radium is formed by the degradation of uranium, a naturally occurring radioactive element which is also present in minute quantities in the Bath mineral waters. Radium degrades much more quickly than uranium and consequently produces more radiation.

Radioactivity, it was suggested, provided the explanation of the Bath Water’s success in alleviating so many diseases. Pamphlets were produced by the Spa Director, John Hatton extolling the virtues of the radioactive water.

Efforts were made to collect and concentrate radon by erecting a large cone-shaped lid over the King’s spring and piping the gas to a room in the spa called the Radium Inhalatorium where patients could inhale it. Radium containing drinks became popular as quack remedies and a Bath baker advertised “Radium Bread”. Even in 1931, the highly reputable publication “Recent Advances in Rheumatic Diseases” still recommended small intravenous doses of radium!

Unfortunately, Prof. Saubermann’s advice turned out to be a disaster.

Ebenezer McBurney Byers (1880-1932) was a wealthy US champion amateur golfer, an alumnus of Yale and socialite who ran a large iron manufacturing company.

In 1927 Byers fell from a train on his way to a golf championship and hurt his arm. His injury did not improve. Conventional medication did not seem to help, so he answered an advertisement for a miracle elixir called Radithor, sold by a man named William J.A. Bailey, a fraudster who claimed to be a doctor but wasn’t. Radithor was a toxic solution of radium dissolved in water. It was supposed to alleviate aches, pains, and invigorate one sexually. Byers took at least three times the prescribed daily dose. After three years of incessant use, his teeth fell out; his jaw had to be removed; holes formed in his brain and skull; and he eventually perished in 1932 from radium poisoning. The US Federal Drug Agency shut down Bailey’s business, but Radithor had already done its damage. The amount of people who perished from Radithor is unknown, but Bailey had sold approximately 400,000 bottles of the tonic – 1,400 of which Byers himself purchased.

The public had an obsession with radium in the 1920s and ’30s that only faded after Byers’ story brought home the real dangers the element. Luckily, most of the quack elixirs claiming to contain radioactivity were fraudulent, and contained no radium at all. But there were many products on the market that did contain radium, which claimed to be extremely good for you – there were radium-infused beauty creams, toothpastes, soaps, and even bars of chocolate.

By 1950, mention of radioactivity had been dropped from spa brochures. In fact, the amount of radiation is well below the level considered dangerous to health even if someone spent days bathing in the water. However, there is still some controversy, particularly in continental spas, on whether small amounts of radiation might have some health enhancing effects. Radioactivity still has some application in medicine and is widely used in cancer treatment and for some diagnostic tests using radioactive isotopes. 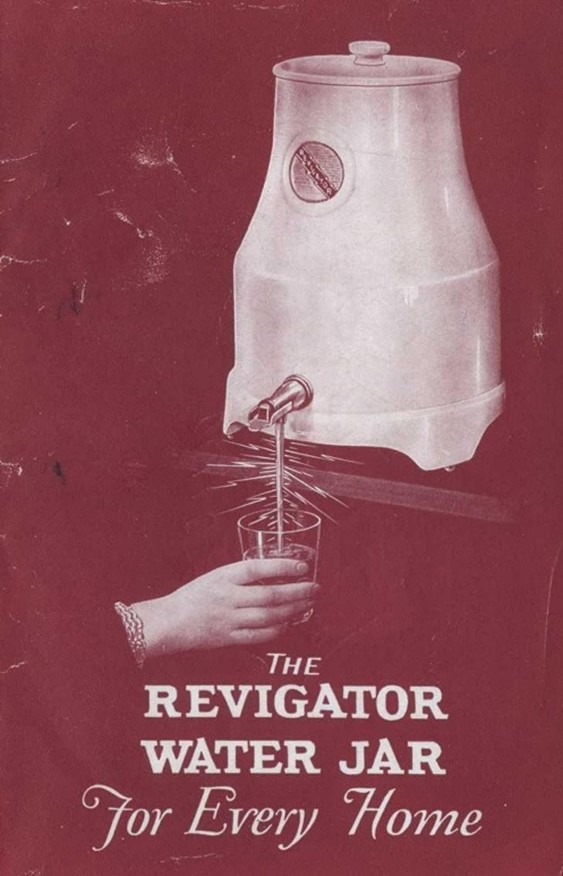 All elements have a nucleus containing neutrons (no charge) and protons (positively charged) orbited by electrons (negatively charged). A carbon atom, for instance, has a nucleus with 6 neutrons and 6 protons with 6 electrons surrounding it. This is therefore a stable element. The number of protons defines an element’s atomic number. A nucleus becomes unstable when it contains different numbers of protons or neutrons making the element radioactive, i.e. radiating energy in the form of alpha, beta and gamma rays. This radiation results in a gradual loss of protons or neutrons, thereby changing the nature of the element and is termed “decay”. In the process of decay, variations of the same radioactive element are produced, also having unstable nuclei and therefore radioactive. These are called radioactive isotopes. Their atoms have the same number of protons and electrons but different numbers of neutrons. Their radioactivity is often short lived so, with certain precautions, they are useful in medicine for diagnostic tests such as measuring blood flow or gland function.

After an isotope is administered to a patient, it can be located in their body using a special camera which is sensitive to gamma radiation. The amount of isotope taken up by the body can then give information as to the extent of the medical problem.

Technetium-99m is the most commonly used radioisotope in diagnosis and treatment. This isotope decays to Tc-99 and produces a gamma emission of low intensity so that radiation damage is negligible. The half-life is about six hours, but it will remain in the body for some time. Its decay product Tc-99 emits only electrons (beta radiation) which pose no health hazard.

Tc-99m can be used to look at heart muscle damage. The isotope circulates in the blood stream. If a coronary artery is blocked or narrowed, there will be less blood flowing into the heart muscle and therefore less isotope concentrated there. Similar information can be obtained for reduced blood flow in the brain.

Thyroid function with I131

The thyroid gland in the front of the neck produces a hormone called thyroxine which regulates metabolism. It does this by absorbing iodine from food. Using a radioactive isotope of iodine (Iodine-131) enables the absorption of iodine to be assessed in a scan. The normal thyroid cells show up as absorbing the radioactive iodine well by glowing brightly on the scan, but the cancerous (abnormal) cells will show less radiation (cold spots) inside the thyroid gland or with unexpected radiation (hot spots) outside the thyroid gland, if the cancer has spread.

Isotopes of other elements like cobalt, xenon, iron and phosphorus are also used to diagnose some cancers or produce images of organs.

What was Radithor and what did an American golfer have to do with radioactive medicine? When radioactive elements were first discovered in the Bath springs, people believed they had found an explanation for the water’s curative effect. Email us today to book the medical history learning session of a lifetime.